I am delighted to welcome Joanne Major and Sarah Murden as my guests today.

Joanne and Sarah are genealogists, historians and co-authors of An Infamous Mistress: The Life, Loves and Family of the Celebrated Grace Dalrymple Elliott and A Right Royal Scandal: Two Marriage that Changed History.

They are also joint hosts of the blog, 'All Things Georgian', where they publish twice weekly with a wide remit of writing about ‘anything and everything’ connected to the Georgian era. Expect everything from extra and exclusive information relating to their biographies to articles about false bums and tums (fashion victims are nothing new!) and local murder mysteries. If it grabs their attention, then they hope it will interest their readers too. Nothing is off limits!

In 1794, despite being his first cousin, Caroline was chosen to be the bride of the dissipated George, Prince of Wales; heavily in debt, he agreed to marry in return for an increased allowance. The choice of suitable Protestant princesses was limited and the prince’s lover, Frances, Countess of Jersey, encouraged his suit for the hand of Caroline of Brunswick, knowing full well that the two would be ill-matched. James Harris, Baron Malmesbury (later the 1st Earl of Malmesbury) was despatched to Brunswick to escort Princess Caroline to her new life in England.

Lord Malmesbury first met Caroline on 20th November 1794 and was tolerably pleased with what he saw. He recounted his first impressions in his diary. 'The Princess Caroline much embarrassed on my first being presented to her – pretty face – not expressive of softness – her figure not graceful – fine eyes – good hand – tolerable teeth, but going – fair hair and light eye-brows, good bust – short, with what the French call “des epaules impertinentes” [impertinent shoulders]. Vastly happy with her future expectations. The Duchess full of nothing else – talks incessantly.'

Almost a week later, Malmesbury recorded that, ‘Princess Caroline improves on acquaintance, is gay and cheerful, with good sense’ but, worried by her lack of tact and tendency to talk too much and too indiscreetly, he set about ‘coaching’ the princess, fearing her education inadequate to her new position. The Duke of Brunswick’s opinion of his daughter was that ‘she's not stupid, but she has no judgement - she was raised sharply, and it was necessary.’

The Princess Augusta was not known for her tact, nor for keeping her tongue still and had happily regaled Malmesbury with anecdotes about her royal relations. Caroline was made in the same mould but her particular fondness was for matchmaking.

'Princess Caroline very missish at supper. I much fear these habits are irrecoverably rooted in her – she is naturally curious, and a gossip – she is quick and observing, and she has a silly pride of finding out everything – she thinks herself particularly acute in discovering likings, and this leads her at times to the most improper remarks and conversation.'

All the German princesses had been taught to speak English, in anticipation of becoming Princess of Wales, and so Caroline was reasonably fluent in the language and spoke French. But other aspects of her education had been woefully neglected. Lord Malmesbury tactfully addressed the issue of Princess Caroline’s toilette and cleanliness.

'On these points I endeavoured, as far as was possible for a man, to inculcate the necessity of great and nice attention to every part of dress, as well as to what was hid, as to what was seen. (I knew she wore coarse petticoats, coarse shifts, and thread stockings, and these never well washed, or changed often enough.) I observed that a long toilette was necessary, and gave her no credit for boasting that hers was a “short” one.'

Despite all this, Caroline was charming company; Malmesbury noted that ‘she improves very much on closer acquaintance – cheerful, and loves laughing.’ But poor Caroline faced a losing battle at the outset. She had an exuberant personality but had led a sequestered existence; just when she saw a chance to enjoy herself she was being told to rein herself in. George III wrote to his sister saying he hoped his niece would not have too much vivacity, and would lead a sedentary and withdrawn life. With Lady Jersey meddling behind the scenes back in England, desperate to keep the Prince of Wales’ affections, it was no surprise that the marriage was to prove a disaster.

The scheming Lady Jersey was to be the new Princess of Wales’ Lady of the Bedchamber and was there to meet Caroline when she stepped off the royal yacht at Greenwich on 5th April 1795. Instantly, Lady Jersey set about humiliating her new mistress, criticising her clothes and insisting, against royal protocol, on sitting facing forwards in the carriage she was to share with Caroline, claiming she felt sick travelling backwards. Lord Malmesbury was having none of it and took Lady Jersey into his own carriage while Caroline travelled with Mrs Hervey Aston (a Woman of the Bedchamber who dutifully accepted her allotted position in the carriage) to the Duke of Cumberland’s apartments at St James where she was to meet her new husband for the first time. As the Prince of Wales entered the room, Caroline sank into a curtsey from which George raised her, before leaning in to embrace his bride-to-be. And then he left, quite abruptly. At dinner that evening, Lord Malmesbury was outraged by Caroline’s behaviour (it would seem that the princess had the measure of Lady Jersey by this time).

[Caroline] was flippant, rattling, affecting raillery and wit, and throwing out coarse vulgar hints about Lady [Jersey] who was present, and though mute, le diable n’en perdait rien. The Prince was evidently disgusted, and this unfortunate dinner fixed his dislike, which, when left to herself, the Princess had not the talent to remove; but, by still observing the same giddy manners and attempts at cleverness and coarse sarcasm, increased it till it became positive hatred.

The marriage went ahead three days later, the prince rolling drunk at the ceremony. Despite (or maybe because of) his drunkenness, he managed to consummate his marriage despite his revulsion before, as Caroline claimed, ‘he passed the greatest part of his bridal night under the grate, where he fell, and where I left him.’ George later claimed that he had been intimate with Caroline only three times, twice on his wedding night and once more on the following evening. It proved to be enough; Caroline gave birth to a daughter, Princess Charlotte Augusta, nine months later.

Caroline and George lived separately and the prince cruelly restricted Caroline’s access to her daughter; the Princess of Wales, hugely popular with the British people, led an increasingly erratic life. The ‘Delicate Investigation’ in 1806 looked into claims of her infidelity and she was later accused of being the mistress of her Italian servant, Bartolomeo Pergami, with whom she lived in Italy. In 1817, when Princess Charlotte of Wales died in childbirth, her child perishing with her, Caroline was not informed of her daughter’s death and only heard of it from a passing courier. George, now the Prince Regent, instigated proceedings against his wife, determined to find evidence of her adultery in order to divorce her (his own adultery did not count!) and while this was ongoing George III died; Caroline was now a queen.

George IV’s coronation was held on 19th July 1821. Caroline was determined to be there but, on the day, she was refused admittance to Westminster Abbey and denied the chance to be crowned. She fell ill and died shortly thereafter, on the 7th August 1821. 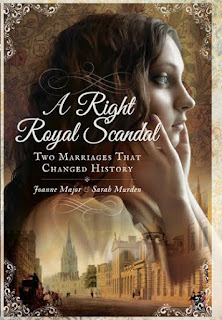 Our book, A Right Royal Scandal: Two Marriages That Changed History charts a forgotten chapter in the history of the British royal family. Almost two books in one, A Right Royal Scandal recounts the fascinating history of the irregular love matches contracted by two successive generations of the Cavendish-Bentinck family, ancestors of the British Royal Family. The first part of this intriguing book looks at the scandal that erupted in Regency London, just months after the Battle of Waterloo, when the widowed Lord Charles Bentinck eloped with the Duke of Wellington's married niece. A messy divorce and a swift marriage followed, complicated by an unseemly tug-of-war over Lord Charles' infant daughter from his first union. Over two decades later and while at Oxford University, Lord Charles' eldest son, known to his family as Charley, fell in love with a beautiful gypsy girl, and secretly married her. He kept this union hidden from his family, in particular his uncle, William Henry Cavendish-Scott-Bentinck, 4th Duke of Portland, upon whose patronage he relied. When his alliance was discovered, Charley was cast adrift by his family, with devastating consequences.
A love story as well as a brilliantly researched historical biography, this is a continuation of Joanne and Sarah's first biography, An Infamous Mistress, about the eighteenth-century courtesan Grace Dalrymple Elliott, whose daughter was the first wife of Lord Charles Bentinck. The book ends by showing how, if not for a young gypsy and her tragic life, the British monarchy would look very different today.